Twenty years ago, I got married.

That will be news to many of you.

But it’s not the thing about this story that will most surprise you. That comes later.

Twenty years ago I stood in a town hall in Tunis and married a man I had known for less than a year. He was tall, dark and insanely handsome. And I was completely head over heels.

None of my friends or family were there. The logistics were too complicated and besides this wasn’t, in my mind, our ‘real’ wedding.

Our ‘real’ wedding – with the white dress and all of our loved ones – would come later. This was simply a formality we needed to go through so that we could live together.

You see, surprise number two: my husband was Tunisian.

And although our original plan had been to live together in Tunis – we had a beautiful apartment there not far from his family home – I had decided that I didn’t want to leave the UK.

Cart before horse. But so be it.

And this is not the thing about this story that will most surprise you.

Fast forward a few months. My husband and I are living together in a little garden flat in Brixton, London. He’s had some struggles finding work, settling in and he misses his family and his home. But we’re OK. Not brilliant. But OK.

Then 9/11 happened and everything in our world changed. People spat at my husband and I in the street and called me a ‘traitor’ and a ‘whore’ for being married to an “Arab” man. He was chased by a gang of white youths; had a broken bottle thrown at his face; was sacked from his job with no explanation.

And this is not the thing about this story that will most surprise you.

When I met my husband he was a happy, optimistic and positive man. Now he became moody, sullen and withdrawn. He began to drink and to gamble. Both of which were contrary to his religious and cultural beliefs and so his sense of himself was shattered. And my handsome, happy and very proud husband became a man I didn’t recognise.

I am no pushover. I am a strong woman. My husband was a strong man. We might have made it through those tough times but for the thing about this story that will surprise you next.

My husband and I began to argue. Truth be told, we argued all the time. About money. About my work. About his gambling. About my male friends. About everything.

And then one day, in the heat of a spectacular row, he hit me.

I had always said that if a man raised his hand to me, I would walk away without a backward glance.

But I didn’t. Not straight away. Not for more than a year. Not until in the midst of yet another row, he put a pillow over my face to ‘shut me up’ and I nearly died. Not until he threatened me with a knife. Not until I realised that I simply couldn’t fix it.

And still, that’s not the part of the story that will most surprise you.

Ask me if I regret marrying my husband and I will tell you, honestly: No.

In spite of everything that happened.

In spite of the damage done.

In spite of the heartbreak caused.

Because of these two words: “What if?” 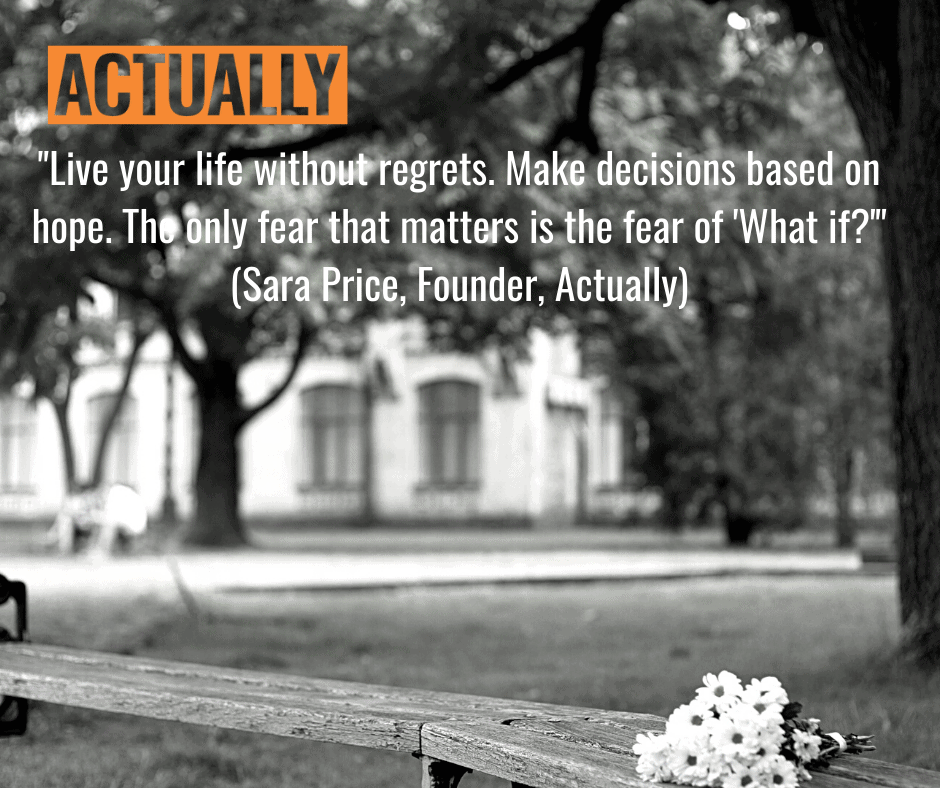 If I hadn’t married my husband – a man I truly loved; if I hadn’t taken that leap; I would have spent the rest of my life wondering ‘what if?’

What if he was the love of my life?

What if we could have been happy?

What if it had worked?

So no, I don’t regret my marriage. I wish I had left sooner – and my advice to any woman in the same situation would be to leave IMMEDIATELY – but even in the darkest days of our divorce, I never regretted marrying him in the first place.

And THAT is the thing that surprises people most.

But it shouldn’t really. My Dad told me when I was a kid that the saddest words in the English language are ‘What if?’. And so, whenever I am presented with an opportunity or choice, one of the questions I ask myself is this: when I look back on my life, if I don’t do this thing will I always wonder ‘what if?’.

The only things in my life that I truly regret came about because I ignored this rule.

I stayed in a job that made me miserable instead of taking the leap into a new opportunity.

I turned down the chance to live and work in New York because I was scared of leaving my home.

These are the things I will always wonder ‘What if?’ about.

Thankfully there aren’t that many of them. And my marriage isn’t one of them.

How is this relevant to you right now?

But I say to my clients all the time: live your life without regrets; make decisions based on hope; the only fear you should have is the fear of ‘what if?’.

And this is the story of why.

Let’s ACTUALLY live without regrets. Let’s be brave. Let’s make a difference and change the world.