Recently I interviewed Kate Levine, Director of Global Activism and Communications at The Body Shop for an ad hoc series of interviews with changemakers. One of the things I asked her was which of the many campaigns she has been involved in was she was particularly proud of. There were a few, but her face really lit up when talking about this campaign: Forever Against Animal Testing launched in June 2017. So, I thought I’d take a look and see what five lessons I could draw out from this campaign that might be of use to the rest of us:

I often advise start up campaigners on the benefits of collaboration: building a team of supporters so that they don’t burn out; working with other, more established, organisations who share their vision and have reach and influence; or partnering with organisations that have a slightly different – but sympathetic – focus, who can bring a different audience to their work. But collaboration isn’t just for small campaign groups or individuals starting out on this journey to change the world. The Body Shop is a big brand with great name recognition and an amazing network of supporters around the world, not to mention a presence on many high streets. And yet, even The Body Shop knows that partnership with others can add huge value to any campaign. They have been partnering with Cruelty Free International to campaign to end animal testing for many years and as Kate said during our interview, it is a collaboration that gives them even greater reach and subject expertise.

Be true to who you are

The Body Shop was founded back in the 1970s by Anita Roddick and from the outset she was considered a maverick by the industry. Hers was the first cosmetics company to challenge the use of animal testing. It was a decision that came from her deep personal convictions and it has been central to the vision and values of The Body Shop ever since. The company has run some incredible campaigns over the years but The Body Shop brand is and will forever be, associated most closely with this stance against animal testing. Drawing on this heritage gives their campaigns an authenticity that resonates with their fans old and new. 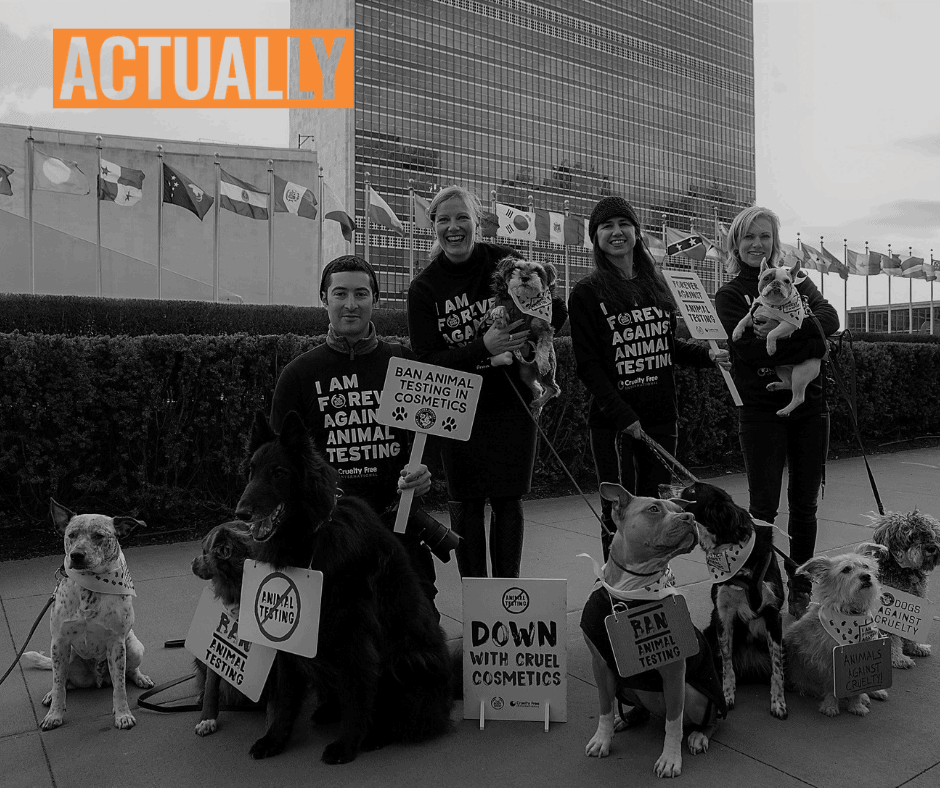 The Body Shop’s aim was to get eight million signatures on a petition calling for the United Nations to end animal testing for cosmetics products and ingredients “everywhere and forever”. That’s an awful lot of signatures! Was it a risk to set such an ambitious target? Maybe so. But as my Dad always says: you may as well aim for the stars – if you don’t quite make it, you’ll still be in the heavens. And, in the end, it was a risk that paid off. By being ambitious, by taking a big stand, they were able to create a big splash generating lots of coverage for their launch which set the pace and created momentum for a campaign that eventually garnered well over 8 million signatures.

Kate’s communications team did a brilliant job with the launch of this campaign – with extensive coverage around the world. The challenge then was to keep up the momentum, to maintain interest beyond the buzz of a launch and that requires creative thinking: new angles, new stories, new stunts and collateral. Just one example of the creative elements of this campaign has been the focus on domestic pets. By bringing pets into the campaign, the Body Shop team were able to create conscious and unconscious parallels between how we feel about our cats, dogs and rabbits and the animals subjected to cosmetic testing. We wouldn’t tolerate it if someone squirted shampoo into the eye of our beloved pet dog, was the subliminal message, so why tolerate it for any animal? I particularly loved the range of pet bandanas, t-shirts and totes that The Body Shop created with the campaigns strapline ‘I’m forever against animal testing’ printed on them. And when the team visited the United Nations in New York, they took their pooches with them – creating a great photo story and wonderful social media collateral.

I’ve said this before about the best campaigns that I have featured on this blog: you have to be prepared to be consistent and in it for the long haul. The Body Shop has been campaigning for over 30 years on this issue. Their ‘against animal testing’ campaigns secured a ban on animal testing for cosmetics in the UK in 1998, but they didn’t stop there. In 2003, the EU brought in a ban on animal testing in cosmetic products. But The Body Shop didn’t stop there and that ban was extended in 2013 to banning the sale and import of animal tested products and ingredients. And still The Body Shop didn’t stop. With this latest campaign, they have taken the fight to a global level. Even now, 80% of countries in the world still have no regulation banning cosmetic animal testing – despite the fact that non-animal tests are cheaper and more efficient. I have no doubt that The Body Shop will keep campaigning until it’s 0%.

I love The Body Shop’s campaigns. My personal favourite – beyond the ‘against animal testing’ campaigns – was their self-esteem campaign featuring the generously proportioned plastic doll “Ruby” and the strapline: ‘There are 3 billion women who don’t look like supermodels and only 8 who do.’ Researching their campaigns for this blog has reminded me of the many reasons why I was an ardent customer of theirs in the 1980s and 1990s. And I will be again. So it seems their campaigns serve a commercial purpose too – bringing back former customers as well as engaging their existing ones. It seems that Anita Roddick was right, doing good can also be good business.

PS: If you’d like to know more about this campaign then do visit The Body Shop’s website here.

PPS: I asked Kate one last question: what can consumers do to support this campaign? Her answer was clear and unequivocal: “Just make sure they buy cruelty-free products!”