“If you see something that makes you angry or resonates with you, don’t wait for someone else to do something about it. “ (Amika George)

As a seventeen year old in the midst of her A’ levels, Amika started a campaign #freeperiods to persuade Government to do something about period poverty in the UK. A mass protest outside Downing Street, 200,000+ signatures on a petition and a massive social media campaign – and in March 2019 the Government announced that they will fund free menstrual products in all secondary schools and colleges in England. Amika is still fighting – for the rights of girls in primary schools. She doesn’t ever give up. And she doesn’t let anyone tell her that one person cannot make a difference. Here are the five lessons I think we can all learn from Amika George:

When I talk to people about the things they are angry, sad or passionate about in the world and they say ‘I can’t do anything about it. I’m just one person.’ or ‘I’m too young / old / busy / tired.’ or ‘Nobody is going to listen to me.’ I point to Amika George. As she says: “If you don’t start from somewhere, you don’t know the impact you can actually have and when you set your sights on what really matters to you, time is on your side.” 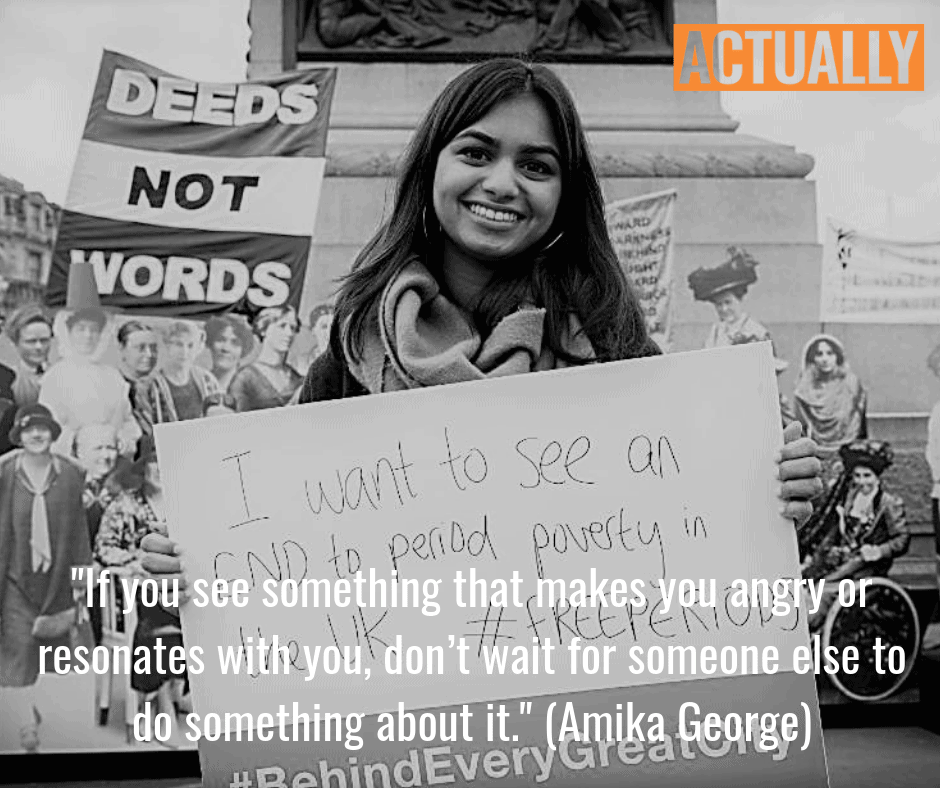 In this video for the Gates Foundation (https://youtu.be/7EqBo1ODsJo) Amika talks about how to start a campaign. Those of you who follow Actually avidly (there are some!) will be unsurprised to know that I wholeheartedly agree with Amika when she says here: “When starting a campaign, it’s really important to know your subject and to know what you’re dealing with.” Absolutely. When you’re attacked or derided – and you will be – having a bank of useful facts and figures that prove your case is invaluable. Even more important, in developing your campaign, research will help you shape a strategy that will ensure your message is heard by the decision-makers who can effect change.

Campaigning can be lonely and trying to do everything yourself is not only ineffective, it’s potentially disastrous for you and your campaign. Lucy-Anne Holmes from No More Page 3 talked openly about how close she was to burning out before she began to build a team (https://actually.world//no-more-page3) Amika recognised this from the outset and collaborated with The Pink Protest and others to ensure her campaign was a success.

It can be scary to start a campaign – or even to join an existing one – and start making your voice heard. And there will be things along the way that make it scarier still. The haters on social media. The incomprehension of friends or family. And all the firsts…the first blog, the first petition, the first interview, the first protest…the fear and the temptation to hide under the duvet can often be overwhelming. But, as one of my heroes Brene Brown says: ‘The willingness to show up changes us. It makes us a little braver each time.’ Keep going. Keep showing up. Just like this seventeen year old school girl did. If she can. You can.

Reach for the stars

Why aim small? Why limit yourself or your campaign? Why listen to that little voice inside your head that wants to tell you what you can’t do. Instead, think big; aim higher; go for broke. Amika didn’t decide to tackle period poverty in her school, her town or even her region. She decided to address this at a national level. If you reach for the stars, what is the worst that can happen? Maybe you’ll only make it as far as the moon. That’s still further forward than you are now. Or maybe you won’t make it off the ground. Maybe you’ll fail? Yup. It happens. So you may as well fail whilst aiming high. It’s a lot more embarrassing to fall at the smaller hurdles than at the great big ones. And if you fall, get up, dust yourself off and try again.

As another hero of mine, Oprah Winfrey says: ‘Think like a queen. A queen is not afraid to fail. Failure is another stepping stone to greatness.’