“So come and join us. Rebel for life. For the planet. For our children’s children’s futures. There is so much work to be done.”  Extinction Rebellion

If you’ve not heard of Extinction Rebellion (XR) then I can only assume you’ve been in a coma for the past few weeks! The protests at Trafalgar Square, Waterloo Bridge and other prominent locations around London started on 15 April and have finally given the media (and all of us) something other than Brexit to talk about. Love them or loathe them (I love them), XR generated extraordinary levels of awareness that most campaigns can only dream of. Here are five of the lessons we can all learn from this group of environmental campaigners:

I keep coming back to clarity

Those of you who read my blog about Greta Thurnberg or who follow Actually on social media will know that I have a thing about clarity. When you’re campaigning – if you’re NOT clear about what you’re asking for, how can you expect anyone to give it to you? Extinction Rebellion could not have been clearer with a simple three-point manifesto: tell the truth; reduce emissions to net zero by 2025; set up a Citizen’s Assembly to oversee changes. We can debate whether or not there is any likelihood of the Government acceding to their demands – but there’s no ambivalence about what they want!

It was ‘International Weed Day’ (aka 420) on 20 April; Hyde Park was therefore flooded with crowds of people consuming and trading in cannabis and derived products; leaving behind a huge amount of litter that garnered a great deal of criticism. All of this could have been foreseen with some simple research. Armed with that knowledge, XR could have a) decided not to make Marble Arch a focal point for protests or b) been prepared for potential criticism being incorrectly aimed at them (as it was) or c) have had a team standing by to clear litter immediately (rather than reactively – which they eventually did) thereby garnering positive coverage of their actions. Research gives you options and means you’re not simply reacting to events. Which leads me to my next point… 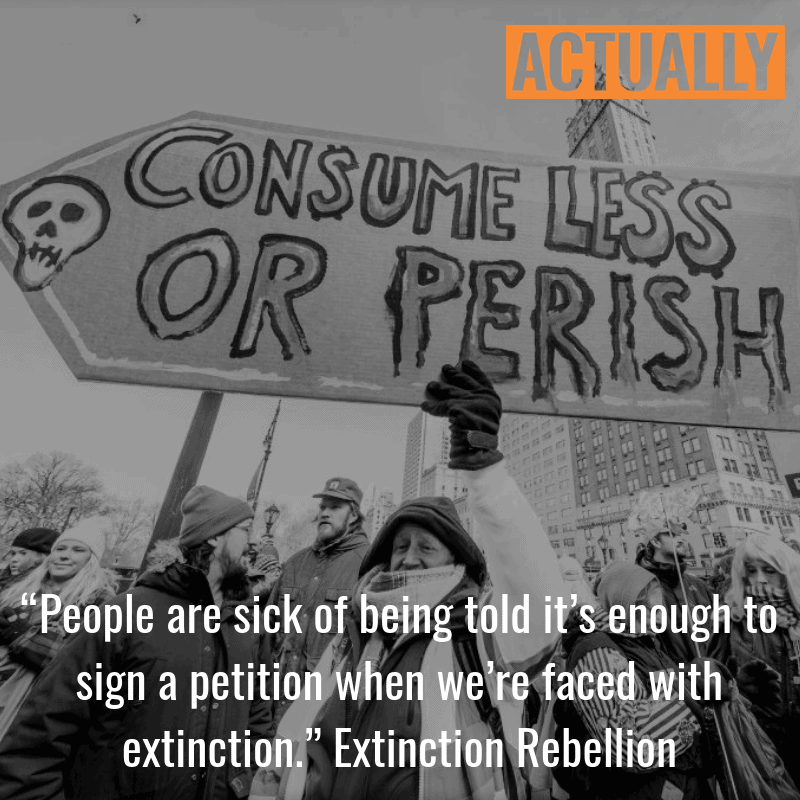 The point of any protest is to generate awareness with a view to encouraging change. If you’re successful, media will want to interview you and you will need properly briefed and well prepared spokespeople. Some of XR’s spokespeople were brilliant – well prepared, well informed and (perhaps) well trained. They came across as intelligent, human, likeable and clear. But there were one or two that should never have been out in front of a TV camera or on a radio station. Being prepared means not only knowing your brief, anticipating questions and knowing how to handle yourself – it means considering, for example, how you’re going to get to the interview.

Never, ever, ever….ever walk out of a media interview

As a spokesperson you need to be prepared for the fact that you may not like the interviewer. They may try to hector and bully you. They may be rude. They may be ill-informed. They may talk over you. It may not be right or fair but that’s a debate for another day. You need to know how to deal with it particularly when you’re being interviewed by someone who is renowned for his ‘robust’ interview style. As a spokesperson: if you can’t cope, if you don’t know how to deal with this or if you don’t want to engage – then don’t do the interview. But NEVER EVER walk out of an interview. It undermines your credibility and your cause. And as an aside, be very careful who you select as your spokespeople…as a communications advisor, I wouldn’t have put this guy in front of a camera on behalf of XR.

One of the things I love about XR is their openness: they welcome everyone, every idea, all input. This shouldn’t be a surprise as it is written into their guiding principles but it is a key factor, in my opinion, of their ability to build community. Crowds of people from all walks of life and all over the country (and the world) came to London to support the XR protests. People who’d never been to a protest came and brought their children. At times, Waterloo Bridge was more like a sprawling family gathering than a protest.  From kirtan to yoga classes; from potted plants to a skate ramp; from a samba band to poetry readings – all were welcomed and so all felt able to take part. Sadly, I was out of the country for most of the protests but that spirit of openness and community made me really want to be here in London to take to the streets in support of XR. And it delivered something that every campaign desperately needs: supporters.

These are only five lessons, there are many more and I may well come back to this campaign in a future blog. In the meatime, from a communications perspective, I think it was – and is – an incredible campaign (a few errors notwithstanding!). And XR’s commitment to reflecting and learning means, I hope, that it will keep on getting better and better. I wish them good luck – they are fighting so that we can have a future on this planet. That’s got to be worth a bit of disruption, right?