For those of you who don’t know her, Gina Miller is a successful business owner, campaigner and activist. She initiated the court case against the British government in 2016 over its authority to implement Brexit without approval from Parliament. And then in September 2019 she successfully challenged the government’s prorogation of Parliament. She founded the True and Fair Campaign in 2012, calling for an end to financial misconduct in the investment and pension industries. She also founded the True and Fair Foundation. This woman is a powerhouse. A force of nature. A beacon for ACTUALLY making a difference in a world where most people simply talk about it.

She was speaking at an event organised by my Club, The AllBright. And frankly, she was awesome! Here are some of the things I took away from her talk.

I cannot tell you how relieved I was to hear that Gina Miller suffers from imposter syndrome! I mean, if she has that nasty little voice in HER head telling her she’s not good enough after everything she has achieved in her life, then I don’t need to feel so bad about my ongoing battle with Doris (my inner critic), right?

Gina’s advice for sufferers was – first of all, don’t blame yourself. It’s thousands of years of socialising that has got us to the point where – particularly as women – we question our value and validity all the live-long day!

Be mindful. Check yourself. Before you disappear down the rabbit hole, physically check yourself and do the opposite of what that nasty voice wants you to do. Don’t hide. Take up space. Own that space. Your physicality will inform your mentality and, just as importantly, it will inform how others perceive you. Don’t be a peahen, be a peacock. 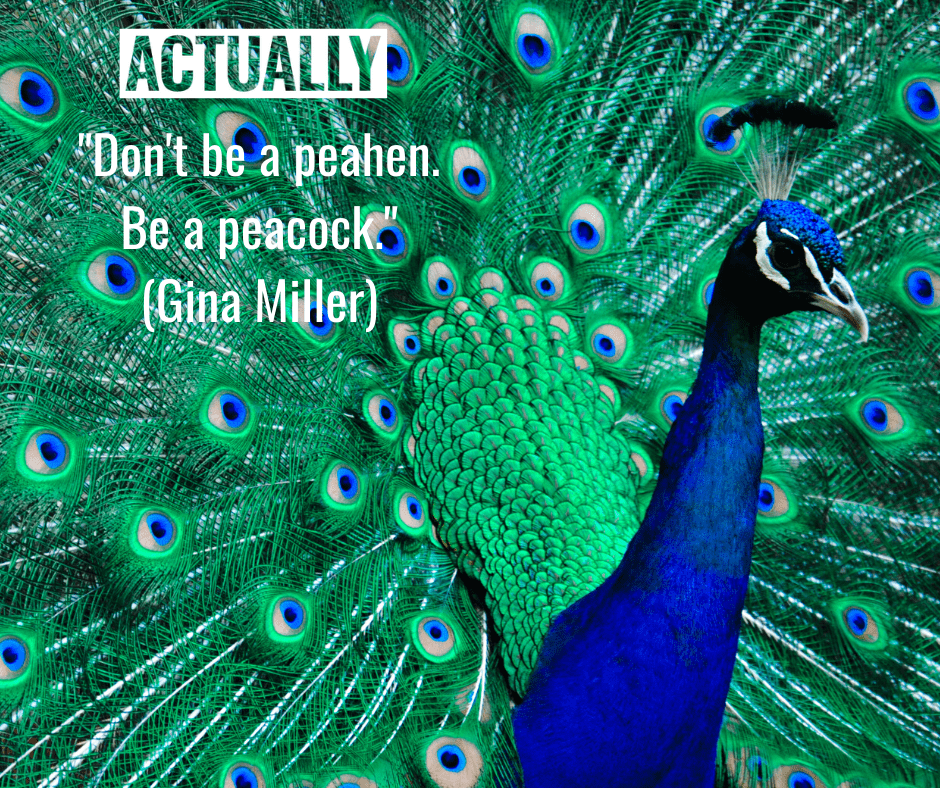 Gina Miller has been subjected to levels of abuse that would definitely have silenced less resilient women. She has received death threats; threats to her family and children. As a woman of colour, she has been on the receiving end of racist and misogynistic hatred that I can only begin imagine. She had to hire private security for herself and her children. She was asked about how she coped with the criticism, abuse and anger directed against her. Her response was typically sanguine.

‘Why should I worry about people abusing me when I don’t agree with their point of view?…If you only have abuse to hurl at me rather than a debate or intelligent argument, then you’re telling me I’m winning already. You’re just giving me permission to keep going.’

‘The temptation is to become tough. To change. But I have tried to resist the temptation to develop a tough skin…Instead, I’ve developed what I call ‘soft hardness’. I know that the strongest things are the most flexible. When I need to, I cry, It’s a mechanism of release.’

Gina talked about the fact that so many women undermine themselves in the workplace because they want to be liked. The inner ‘people pleaser’ comes to the fore and we acquiesce when we should object. Stay silent when we should make a fuss! Her view was simple:

‘You don’t go to work to be liked. Who cares if they don’t like you? Do your job and do it to the best of your ability. And if that means speaking up. Do it. You don’t have to do it all the time. Pick your moment. Speak calmly. Act with grace and intelligence. Lower your tone. Speak slower and lower…’

As well as speaking out, Gina talked about the superpower of listening – something that she believes women and introverts are particularly skilled at. According to her:

‘Listening is sometimes the most powerful thing you can do. Listen and then pick the right moment to speak. People will often reveal their Achilles heel if you just listen for long enough.”

It’s not enough though to listen. Gina insists you also have to know your stuff and there is no shortcut to that.

ON HAVING BIGGER FISH TO FRY

At the time of this event, the coronavirus pandemic was a glimmer on the horizon and the big issue of the day was still Brexit. But in spite of all her activism in relation to Brexit, Gina wanted to focus on what she felt were bigger and more important issues.

In particular, she wanted to highlight the fact that in so many parts of the world human rights and women’s rights are being rolled back.

She referenced the alarming increase in trafficking and sexual violence against women around the world and laws allowing rapists to evade criminal charges by marrying their, often under-age, victims. And she talked about responsible capitalism – ‘So much tick box nonsense’. Her argument was that we can’t tinker with capitalism and pass off ‘social responsibility’ projects as genuine responsibility. Instead, to make a real difference, we need to change capitalism at its very heart. We need to change the aggressive pursuit of a single bottom line and instead insist that all companies adopt a triple bottom line: people, profit, planet. If anyone can persuade them, I suspect it’s Gina Miller!

PS: Gina’s advice for women was to be kind to yourself and not to read too many books about strong women because it makes you feel bad about yourself. ‘The whole idea of being perfect is a nonsense,’ she said. ‘Everybody’s life is different and incomparable.’ I’d make an exception for her book: Rise.