I haven’t always had the greatest relationship with my Mum.

I won’t rehash the details. We don’t have that long and besides, it isn’t just my story to tell. Suffice to say that years would go by when we didn’t speak and I have friends who consider her to be the Devil incarnate.

But this isn’t the story of my past with my Mum. It’s the story of our present. And if you had said to me 5 years ago that we would be where we are now, I would have laughed and suggested, politely, that you were not quite sane.

I have been working with a healer, Mary, for about 5 years. A lot of our discussions have focussed on my history with my Mum.

To paraphrase Richard Gere in Pretty Woman: I was very angry with my Mother.

Mary never once said or even implied that I didn’t have the right to be angry.

She allowed me to tell my stories.

To release my anger.

To realise that underneath all that fury was, in fact, grief.

To cry and shout and rant and rail.

And then, every time, she would ask me when I was going to go and see my Mum.

For months…years in fact…I would look at her as if she had gone completely mad.

‘Haven’t you heard a single word I’ve said? Don’t you understand what that woman did to me? Why on Earth would I go and see her?’

And I would huff and puff and say ‘Not in a million years.’ And we’d move on.

A few months ago, I finally went to see my Mum.

It was simple in the end. I was sat in Mary’s room talking about something or other. When I was done, instead of asking me when I was going to see my Mum, Mary said:

My Mum has dementia. She lives on the Isle of Wight in a Residential Nursing Home. They take wonderful care of her.

I’d love to tell you that she took one look at me, threw her arms around me and said ‘Sorry’ for all the things she had done to hurt me.

I told her I was sorry. And in that one act, that one moment, I felt lighter and happier than I had in years. She smiled her beautiful smile and somehow, I knew that on some level she had heard me and understood and was saying sorry too.

Here’s the thing: I could have spent another five years telling my stories to Mary. Rehashing every element of my difficult relationship with my Mother. Rehearsing all the reasons I had to be angry and feeling utterly justified in my persistent refusal to go and see her. Becoming more and more deeply entrenched in my position.

But then I would never have seen that beautiful smile.

The moral of this story isn’t that you should forgive those who wrong you.

The moral of this story isn’t that harbouring anger hurts you far more than it hurts the other person.

The moral of this story isn’t that you should approach your parents with compassion and understanding because they did the best they knew how to do.

All of these things are true – in my opinion.

The moral of this story is something else entirely.

The moral of this story is: JFDI.

Stop wrapping yourself up in stories.

Stop going round the houses and back again.

Because sometimes, it’s action that heals – not words. And the learning isn’t in the talking, it’s in the doing. 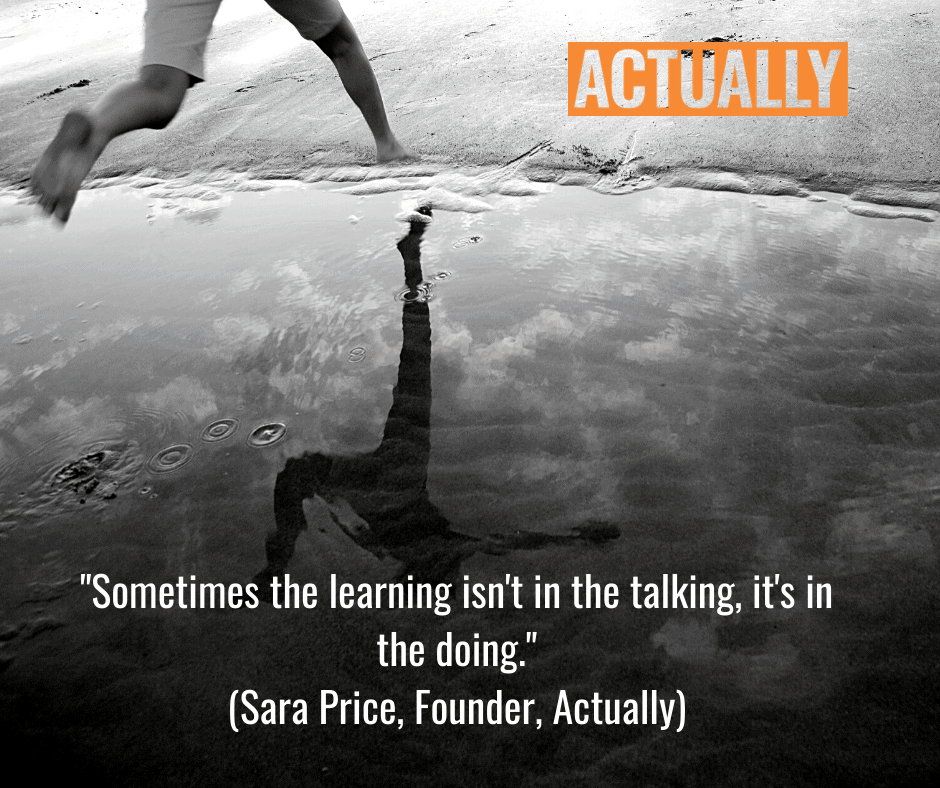 Besides, if we are going to change the world, we need to get on with it.