Picture the scene: it’s a balmy 26 degrees, the sky is blue, the sun is shining and sending shimmers of light fracturing across the surface of the ocean. At the front of a beautiful room furnished simply but luxuriously with wood, bamboo and linen, a man is speaking about love-based leadership; he’s explaining how love is the antidote to violence and racism and how he is working to realise his father’s dream. His father was Dr. Martin Luther King, Jr.

Later that same day, another man talks about how we can resolve even the most entrenched conflict by respecting the dignity and humanity of our opponents and being willing to do things that are deeply unpopular because we know them to be right. He won a Nobel Peace Prize for bringing a 53 year long civil war to an end in his home country of Colombia.

Another day, a different but no less beautiful room and another man is speaking. His voice is soft and his smile broad as he shares an insight into his world. As the former Prime Minister of Bhutan, he is clear on how the principles of the Gross National Happiness approach make for better policy decisions and can be applied within business.

And later, a woman commands the room, talking about her journey from financial services to Presidential candidate to head of the B Team advising global businesses on how to usher in a new paradigm of doing good by doing good business.

Over the course of five days in March 2019 I was privileged to hear these speakers and more at a Virgin Unite Leadership Gathering on Richard Branson’s Necker Island. These are just five of the many lessons I took away from my experiences: 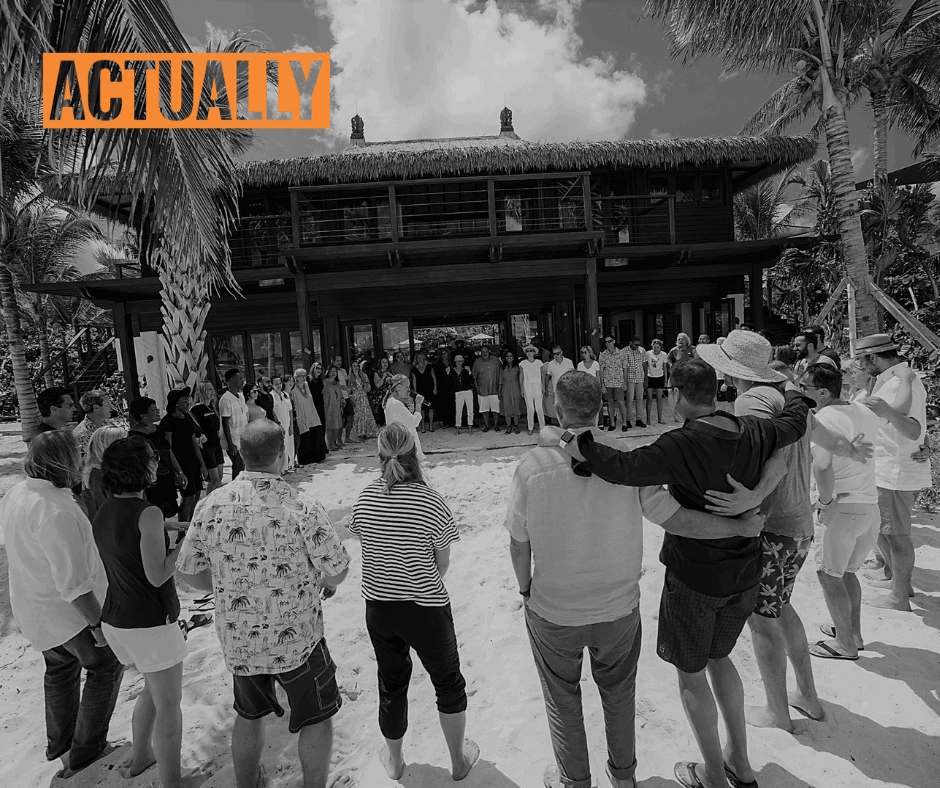 Optimism wins: Our dominant culture is often cynical and negative and at a time of significant global uncertainty, pessimism is an understandable response. I spent five days with people who are not only hopeful of a positive outcome to the world’s challenges, they are actively working to create them and it filled me with hope and a commitment to action. It made me realise the truth of the old adage that you are the average of the five people you spend the most time with and I am determined that my ‘five people’ will be the most positive, the most committed, the most visionary I can find.

Action begets hope and courage: It takes courage to aim higher, to try and change things, to try and change the world. And if we fail, it can feel devastating. Many people are trapped feeling that there is no point in taking action – they have no hope. Or they are paralysed by their own fears. What I realised on Necker Island was that the antidote to hopelessness and fear is action. What generates hope is making strides towards your vision; what encourages courage is the feeling of moving forward.

Vulnerability is the key to connection: Networking is a key component of the PR world and I have therefore always considered connection to have been central to my professional life. I have lots of ‘connections’ but what the people that I met on Necker Island showed me was that without a willingness to be seen, to be known, to be vulnerable, true connection – whether personal or professional – cannot exist.

Everyone suffers imposter syndrome: I spent the weeks running up to this trip crippled with imposter syndrome. Buying new clothes, shoes and jewellery in the hope that if I was super well-dressed nobody would notice that I didn’t belong. Over the course of the five days, every single person I spoke to confided that they too had felt the same way. These were some of the smartest, most successful, most accomplished people I had ever met. The penny finally dropped. Nearly everyone hears that little voice that says they aren’t good enough or don’t belong or are about to be found out. And if nearly everyone hears that little voice – and gets on and does what they need to anyway, so can I.

No regrets: I used to say that I had no regrets – other than any hurt I may have caused to others. I used to say that. But over the past few years I noticed that regrets have been creeping in. I’ve been spending more time regretting the choices I’ve made, wondering how my life might have been different if I’d married my childhood sweetheart or taken that job in New York in my twenties. Maybe it’s a natural part of middle age to look back and consider what could have been. But you cannot change the past. Necker reminded me that regret is a wasted emotion. Every single moment of my life had led to that trip – and so I can no longer regret any of those moments, any of my decisions or actions because I’d do it all again to have had those five days.