FIVE LESSONS FROM NO MORE PAGE 3

“If I can start a movement, anyone can.’ Lucy-Anne Holmes

In 2012 a young woman asked herself why a ‘family’ newspaper would publish images of topless women and what that said about the place of women within our society. That woman was Lucy-Anne Holmes and by 2015, her campaign, No More Page 3, had brought an end to nudity in The Sun. These are the five lessons about campaigning that I think we can learn from No More Page 3:

Nothing is so compelling as passion and you can’t fake it. Nothing will make you so courageous. Nothing will drive you as far. Nothing will persuade others to join you as effectively as passion. Passion will keep you going when the sh*t hits the fan, when you’re exhausted, when someone is nasty to you or disagrees with you. If you’re not passionate about the campaign you’re involved in, stop right now.

Be clear about your target

In campaigning, you need to be clear about who can create the change you are looking for. It may be a specific Minister, a business leader or the head of an international institution. Passionate communications targeted at the wrong person are a waste of time and resources but if you know who you’re targeting, you can develop a campaign that will reach them. In the case of No More Page 3 it was the Editor of the Sun newspaper and every aspect of their campaign was specifically designed to reach him. 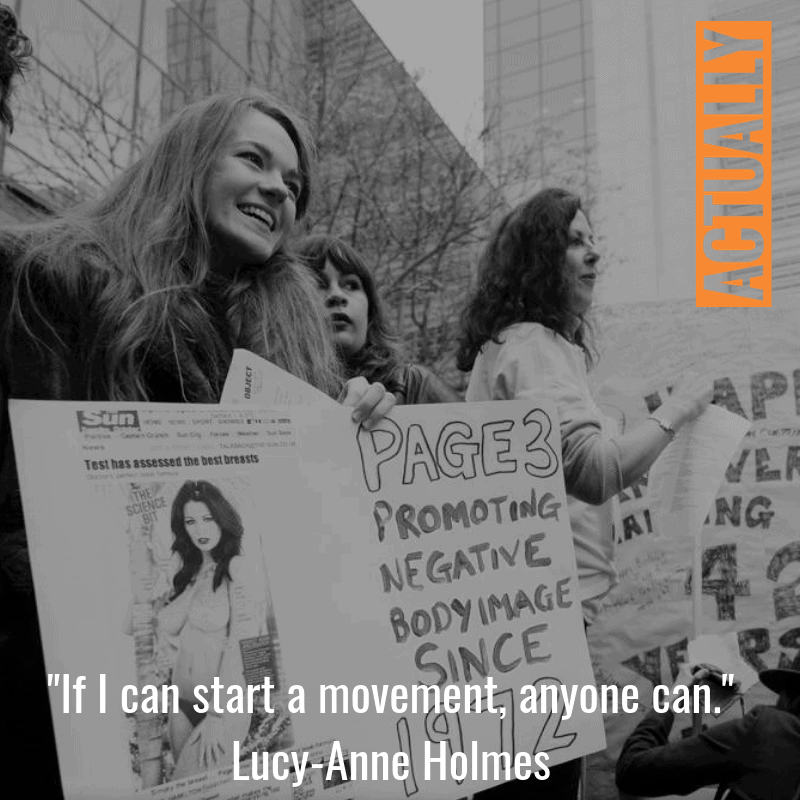 To attract supporters and change minds and behaviour – you’re going to need coverage and for that, you’re going to have to get creative. Lucy-Anne Holmes knows a good media stunt when she sees one. My personal favourite from this campaign was the time that they drove a giant cardboard Page 3 model to LEGOLAND and LEGO HQ. LEGO was a big advertiser with The Sun. The campaigners knew a) that their epic journey was a great picture story and b) that if advertisers – under the pressure of bad publicity – started calling on The Sun to drop Page 3, that would have real impact.

There IS such a thing as bad publicity

If you want to put pressure on someone to change their policy / business practices, then a very effective way to wield influence is to generate bad publicity for them. Bad publicity for Lego led them to put pressure on The Sun. The drip drip drip of constant negative coverage in other national newspapers helped ramp up that pressure. The fact that over 200k people signed a petition and that the matter was debated in Parliament…more pressure. The constant barrage of bad publicity finally took its toll and The Sun caved.

You won’t make it if you burn out

In her book ‘How to Start a Revolution’ Lucy-Anne Holmes says: ‘Burnout hit me like an overwhelming feeling of helplessness. I didn’t know what was going on and it was terrifying…I was spent…I just didn’t have any oomph left.” Here’s the thing: if you burn out, who will lead your campaign? Who will create the change that you want to make in the world? It’s simple, you can’t burn out…not just because that’s a horrible place to be but because your campaign is too important. So, my advice: learn about self-care and make it your number one priority. And build a team of people around you who share your passion and will support you.

No excuses. Do it.