I recently conducted the second of my changemaker interviews. The first was with Kate Levine of The Body Shop. This time, I interviewed Robin Gorna. Robin’s incredible career spans over 30 years, campaigning in the world of HIV and AIDS and to promote the rights of women and girls.

I first met Robin when she was leading what was then a fledgling international movement, SheDecides. I was always impressed by her energy, enthusiasm and encyclopedic knowledge of campaigning and the non-profit sector. It was a real privilege to catch up with Robin: to learn more about her career, her passions and what she has learnt over three decades in campaigning.

Robin started out as a student activist – volunteering in the very early days of the Terrence Higgins Trust and returning to work there when she completed her degree. Her AIDS work brought her into contact with women living with HIV and at risk. As a feminist, she was appalled at the challenges these women faced and the lack of information, education and – crucially – treatment available to them. She became a treatment activist and wrote one of the first books ever on women and AIDS: ‘Vamps, Virgins and Victims: How can Women Fight AIDS?’

Of her career, Robin says: “I’ve done loads of different things. I’ve run a few community organisations, I’ve worked for government in the Department for International Development (DFID). I’ve worked for the European Commission. I’ve worked for local government, both local authority and health authority. And I’ve worked in the UN where I ran the Partnership for Maternal, Newborn and Child Health.”

To have sustained a career of over 30 years in campaigning takes serious commitment. I wanted to know what it was about campaigns that Robin loves most:

“I love taking stuff that might seem complicated…and translating it into information or language which people can understand.”

As well as bringing simplicity to campaigns, what Robin brings more than anything else is hope. In the early days of her AIDS work, things often seemed utterly hopeless. There was little treatment available, people were dying and Robin was acutely aware that endemic homophobia was being fuelled by the panic and misinformation about AIDS.

I can attest to Robin’s incredible energy, her unapologetically high standards and her ability to turn things around very fast. She is a whirlwind – but what she wishes she had known at the beginning of her career is that you don’t have to do it all yourself:

“I think an awful lot of people, if they really get involved in an issue, tend to throw themselves into it with an absolutely unstoppable passion. And I certainly did that. I wish I’d known that doing less can be more effective sometimes than doing everything.”

Robin is, first and foremost, a builder of movements. Nowhere has this been more evident than in her role as co-Lead of the SheDecides Support Unit. In 2017, she took on a fledgling organisation created in the wake of Donald Trump’s expansion of the controversial Global Gag Rule. When she left earlier this year, she handed over a movement with over 140,000 ‘friends’ in 174 countries around the world and over 40 ‘Champions’ within Governments and global NGOs. She is rightly very proud of this work and when I ask her what she is most proud of in her career to date, she explains that it isn’t just the building of the movement – but the fact that it is delivering change at a country level. She draws parallels between this work and her earlier career at the Department for International Development (DFID).

“I think one of the themes of my work has been about connecting the global and the national. [At DFID] we used international political processes – which are often remote, utterly tiresome and impossible to deal with – to create change at a country level. We secured agreements…through the G8 and then the UN General Assembly that there would be universal access to AIDS treatment by 2010. And whilst that absolute deadline wasn’t met…it is remarkable that some words on a page in pompous meeting rooms in the UK and New York could become something that genuinely saves lives and changes lives in countries around the world.” 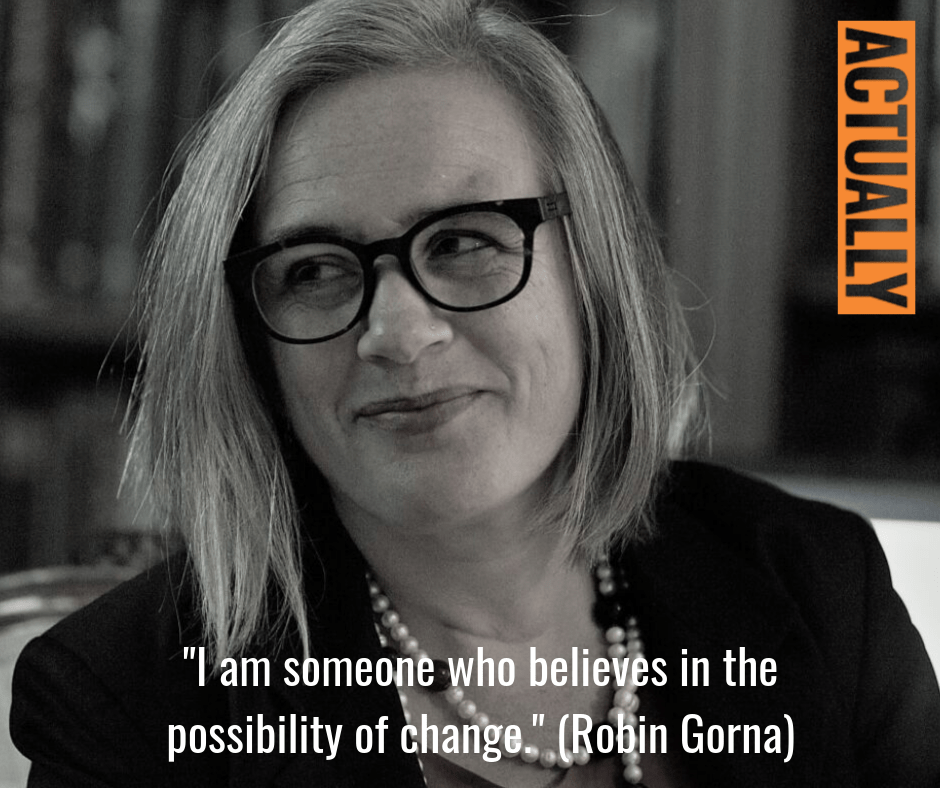 As many of you know, changing the world is not easy and Robin knows better than most that there are no simple recipes for success. But there are some basic ingredients that she believes must be in place:

“I think one of the most fundamental issues is to listen to the people who are most affected…to make sure that the people whose interests you seek to serve are central to everything, that it is those people who are driving, defining and determining what should happen.”

Ultimately, whether you’re talking about individual members of the public, heads of Government departments or heads of UN agencies, we are all human beings and we are all touched by emotion and driven by the desire for connection.

“Emotion is what drives people. People rarely act to make big change based purely on facts and analysis. That’s why creativity: art, theatre, movies, great branding are central to the best movements and campaigns. People are driven by an emotional connection rather than what might necessarily be a better technocratic solution, facts or policies. And that’s why, for example, Greta Thurnberg is having such an impact. What she’s talking about is not at all new, but the connection that she’s building with leaders in her own very unique way is absolutely intriguing. And people are willing to listen to the same message because of that connection. It’s quite fascinating.”

I’ve been incredibly fortunate in my career that I’ve had lots of supportive bosses and mentors – I wanted to know more about Robin’s mentors and the best advice she’s ever been given.

“One of the best bits of career advice that I received was from my friend Peter Piot (Baron Piot) who used to run UNAIDS…he said: “Define where in the world you want to be physically and decide on the people you want to be with.” No-one can [change the world] on their own. So find your tribe and find them in a place you want to be, because that’s going to make you personally happy and that is a precondition for success.”

“The other piece of advice I pass on a lot is something that Carol Bellamy said to me when she was head of UNICEF: “Treat your next career step as a trampoline, not a ladder”…Allow yourself that opportunity to use your peripheral vision, to maybe go backwards in terms of seniority or rank in order to move somewhere even better in the future.”

Robin has observed and been part of many campaigns over her career and so I was aware of posing an almost unanswerable question when I asked her to choose her favourite – but she did not hesitate:

“The campaign that I would pick is the anti-apartheid movement…It incorporated so many different dimensions of what I believe is important in a campaign. The movement started with the needs of the people who were most affected, who were living under the horrors of the apartheid regime. And then this built into a movement of mass international solidarity. People around the world aligned themselves with this movement. It was a truly collective effort and people could write themselves into the campaign as was right for them. And I think that’s massively important – that when you mobilize people, they can give of themselves in a way that works for them.”

When I asked Robin about the changemakers she admires most right now she eschewed all the obvious current choices: Extinction Rebellion, Greta Thunberg – not because they are not doing great work but because she is interested in long-term commitment and sustainable change.

“The person I admire most is Indira Jaising. She is one of the SheDecides champions, someone I only met in 2017 but the more I have gotten to know Indira and understand her history, the woman absolutely blows me away.”

Indira Jaising is a senior advocate, now in her 70s, and co-founder of the Lawyers Collective in India – an NGO dedicated to feminist and human rights causes. Since her very first case she has advocated for the rights of the poor, the vulnerable and the marginalised in India and for decades, she has used legal process to challenge injustice and abuse including, for example, championing legislation to classify sex within child marriage, as rape.

“I just find her career and her history so extraordinary. She has consistently stood alongside the poor and marginalized and been so successful that she is now under threat. The current Government in India have cut off all funding of her NGO but she keeps on going because her work is important and her commitment to human rights is genuine. I hope that all those who support equality and human rights will speak out in support of the Lawyers’ Collective so that Indira can continue her important work.”

I wish Robin good luck as she looks for her next big campaign. Whatever it is, they will be lucky to have her intellect, energy and commitment on board.

Keep on changing the world Robin!

PS: For anyone wanting to show their support for Indira Jaising and the Lawyers Collective, you can sign this petition on change.org.